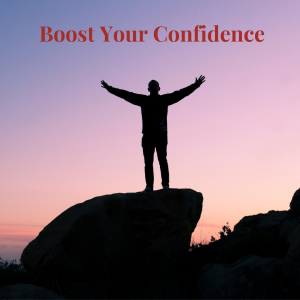 Do you want to boost your confidence? This is the story of how I grew mine. I did a series of challenges that took me increasingly out of my comfort zone.

In the early months of this summer, I did a weekly challenge on Facebook Live, that I called Cowardly to Courageous. Each week I undertook a challenge that was slightly scary for me. Even though the challenges may not have seemed scary to other people, the point was that they were out of my comfort zone. They ranged from jumping from a rock into the sea through having acupuncture, to getting a tattoo of the word Courage on my arm.

The interesting thing about confidence is that we don’t need it before we take action. In fact, it is in the taking of action that we gain confidence. A wonderful result of taking action and gaining confidence in one particular area is that it gives you confidence to do other daunting tasks. So after each challenge I took, I stood taller and felt braver to do the next one.

After that, I did a FB Live challenge for 5 weeks, which I called The Joy of Creation. The goal here was to create something without worrying about it being perfect. Each week I did a different creative art, such as dancing, writing, singing, acting and visual art. People commented on the Lives with their prompts. As soon as I saw a prompt, I had to incorporate it into what I was doing. The one I had the most fun with was the Improv acting with a friend.

After the summer, my challenge was to reach out to people and offer them coaching. I worked through a list in alphabetical order. Meaning I started with Attorneys in Atlanta, Barristas in Brooklyn, Chiropractors in Chicago and so on.  This only lasted a week, as not a single person acknowledged my random message! I gave myself permission to stop and do something else.

Here’s what’s significant though. While nobody was interested in finding out more about a gift of coaching from a random stranger, the project was not a fail. The goal of growing my confidence was a great success. Before the challenges I was reluctant to strike up a conversation with someone I didn’t know. After that, I felt much more able to speak to people, regardless of what they do or where they live. So that’s a win!

As I have said before and will say again, it’s all about taking those small steps and reaching further out of your comfort zone each time. That’s how I have been growing my confidence. I would encourage you to do the same if you asked me how to boost your confidence.